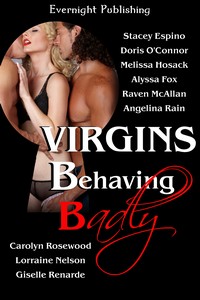 Hawk's Woman is a western historical novella, one of nine short stories to be included in Evernight's Virgins Behaving Badly anthology.

Tabitha Meadows, a member of Boston's elite, elopes with her boyfriend, only plans change when he absconds with her money. The conductor throws her off the train at the next stop. With no money and unwilling to face the scandal in returning home, she meets Brody Hawkins (Hawk) and takes a job as entertainer in his saloon. The handsome cowboy draws her fire and her passion as no one before. Does her virginity stand a chance of surviving his charms?

Hawk isn't looking for a woman, especially one as innocent as Tabitha, but he finds himself drawn to her just the same. He should be a gentleman and buy her a ticket east on the morning train, but he wants her in his bed. Could he convince her to stay?
Read excerpt here.
Read Review here.