Hexed or Vexed by Lorraine Nelson 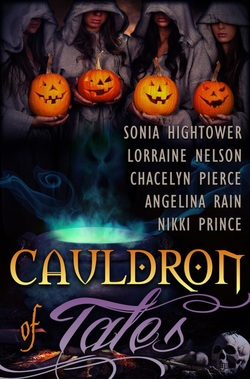 When five witches with wild imaginations get together, the pot boils over with trouble, romance, and sensuality.


In The Devil’s Berries, readers are taken back to Renaissance England where Sabine, facing her last night alive, reveals how the witch really came to be associated with the broomstick. Will her nightly visitor bring her more trouble or will he give her peace?

Cindy can’t decide if she’s Hexed Or Vexed her longtime friend, Killen. All she knows is that one second he was her very manly friend, and the next, he’s a dog. Can her Witchy Group on Facebook help her fix the mess, or will she be burdened with a comical canine companion the rest of her days?

Willow Vance is a poor excuse for a witch, and by some stroke of luck, the six-year-old Past Potion she crafted worked. When the hexed warlock finds out about Willow’s curse, he will stop at nothing for her to lift the spell. Willow can run, but does she want to?

Alone for Halloween, Bryn is ready to take some frustrations out on her purple battery-operated toy, but she’s in for a surprise when the Toy Soldier becomes a flesh-and-blood man. Grateful to be free of his plastic curse, Byron will do anything for her…no matter how naughty.

A dance of seduction under The Light of the Moon turns into a night of passion, but will that be enough for Aponi to keep the man of her dreams enchanted? Or will the flame that was ignited die out just as quickly as it sparked?

Danica finds herself confused after a trip to the carnival with her best friend and coworker. She’s been attracted to Lisette for months, but are her feelings really being reciprocated, or was there A Sappho Spell cast in Madame Lilith’s tent?